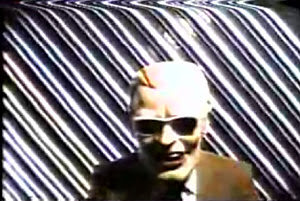 On November 22nd 1987, someone hacked into the signals of Chicago TV stations WGN and WTTW and used the hijacked airwaves to broadcast a short piece of absurdist theater featuring a performer in an oversized Max Headroom mask. The people responsible for this bizarre little incident were never caught, despite the best efforts of the FBI and the FCC.


You can watch the video here
And you can read more about this strange episode in Chicago's media history here.
Posted by Steve Macek at 7:18 PM No comments:
Email ThisBlogThis!Share to TwitterShare to FacebookShare to Pinterest

Here's the latest stinking heap of bad news about the Bush administration's illegal and increasingly savage occupation of Iraq. So far this bloody misadventure has claimed the lives of over 150,000 Iraqi civilians (and 3,000 American GIs), caused countless more serious injuries and, according to a recent UN report, created some 3.7 million Iraqi refugees. The price tag for all this senseless mayhem? In the neighborhood of $ 2 trillion.

It is worth remembering that back in 2002, on the eve of the invasion, White House economic advisor Lawrence Lindsey was fired for predicting that an Iraq war would cost between $100 billion and $200 billion.

For more on the true cost of the war, read on...

The real cost to the US of the Iraq war is likely to be between $1
trillion and $2 trillion (£1.1 trillion), up to 10 times more than
previously thought, according to a report written by a Nobel
prize-winning economist and a Harvard budget expert.

The study, which expanded on traditional estimates by including such
costs as lifetime disability and healthcare for troops injured in the
conflict as well as the impact on the American economy, concluded that
the US government is continuing to underestimate the cost of the war.

Steve Macek
I teach and write about the media, popular culture and American cities. My current research focuses on film censorship and free speech struggles in Chicago.